OUR LEADER PARTICIPATED IN THE INVITATION OF THE IRAN EMBASSY

We must unite with our common sides and unite against Zionism

A CALL FROM OUR CHAIRMAN DR. FATİH ERBAKAN TO PRESIDENT ERDOĞAN

Our Chairman Dr. Fatih Erbakan evaluated the possible results of the US presidential elections.

‘Their agenda is Zionist! There may only be nuance differences.’

Our Chairman Dr. Fatih Erbakan Made The Opening Speech of our October Provincial Heads Meeting

Increase in Foreign Exchange Due to Wrong Economy Management

When the new welfare party comes İnto power, all humanity will be happy!

OUR CHAIRMAN DR. FATİH ERBAKAN CONTINUES TO MEET WITH OUR NATION

THE PRESIDENT OF THE NEW WELFARE PARTY, DR. FATIH ERBAKAN HAS WARNED AT THE BEGINNING OF PROVINCIAL CHAIRMEN MEETING.

‘The circle around Turkey has been tightening’

France's Islamophobia and The Boycott Decision

NEW ERA IN THE TURKISH REPUBLIC OF NORTHERN CYPRUS

WE STRONGLY CONDEMN THE ATTACK OF ARMENIA TO #GENCE

Armenia's attack on Gence is a crime against humanity.

NOT ONLY THE COAST PART OF MARAŞ REGION IN TURKISH REPUBLIC NORTHERN CYPRUS, BUT THE ENTIRE MARAŞ SHOULD BE OPENED TO SETTLEMENT

THE DISTRIBUTION OF THE TREASURY'S AGRICULTURAL LAND IN SMALL PIECES IS THE LAST STRIKE TO THE FUTURE OF THE COUNTRY AGRICULTURE.

WHAT THE UAE AND BAHRAIN AGREEMENT WITH ISRAEL BROUGHT 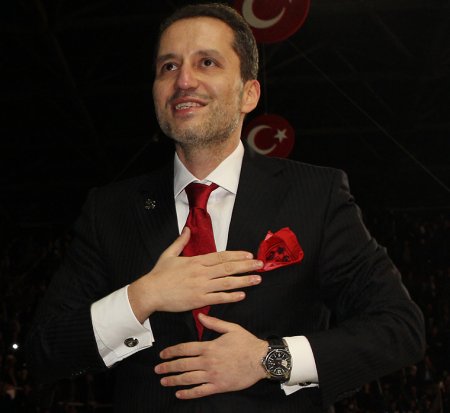 DENK BÜTÇE KAMU-TEK HESABI
Click for more
From the President

Prof. Dr. He is the third child of Necmettin Erbakan. 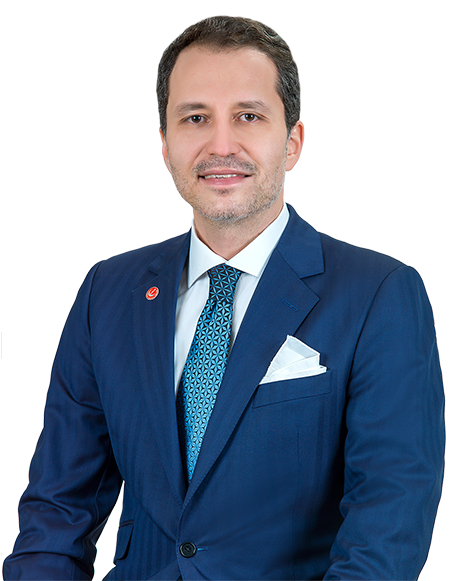 Muhammed Ali Fatih Erbakan completed his secondary education in Ankara Central Imam Hatip Secondary School. He completed his high school education in Ankara Ayrancı High School. Later, he graduated from Electrical and Electronics Engineering department of Başkent University with an outstanding success. He went to England for his master's degree, but had to return due to the death of his mother, the deceased Nermin Erbakan, and he completed his master's degree in Electrical and Electronics Engineering Department of Başkent University, where he received his undergraduate education. After receiving his doctorate in Management and Organization at the same university, he received the title of Doctor.

On Friday, 23 November 2018, he founded Yeniden Refah Party with 99 members of the Board of Founders.

Having a good command of English, Dr. Fatih Erbakan is married with two children. 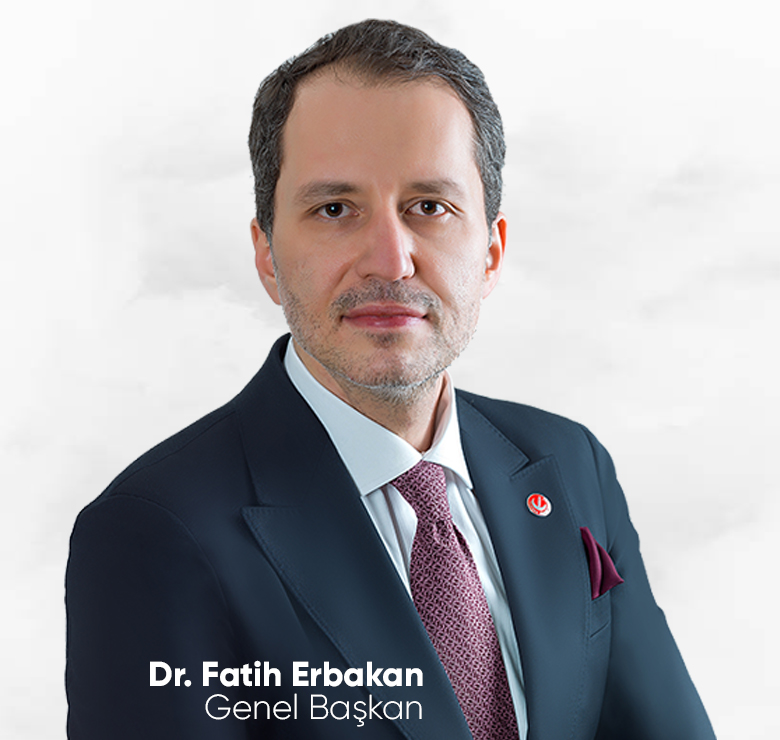 Prof. Dr. Necmettin Erbakan was born on October 29, 1926 in Sinop. He started his education life in Kayseri, but continued in Trabzon due to his father's job assignment. In 1937, he graduated from secondary school in Istanbul Boys' High School in the first rank. Erbakan, who preferred to enter the university with an exam despite having the right to enter the university without an examination, won the right to enter Istanbul Technical University and Süleyman Demirel and Turgut Özal were among students of that term. He completed his university education in 1948.

Erbakan, who worked as an assistant in the Motorcycles Chair between 1948-1951, gave motor lessons for a while. In 1951, he was sent by his university to Aachen Technical University in Germany to do his doctorate, and he completed his doctorate there.

He performed studies with Prof. Dr. Schmidt at the DVL Research Center, which works for the German army. He completed his doctorate at German universities.

He drew attention with his defense of Anatolian merchants and small industrialists against big industrialists and merchants during his years of General Secretary. On May 25, 1969 he was elected as the general president of Turkey’s Chambers and Stock Exchanges Union but he left the presidency since Adalet Party cancelled the elections on August 8, 1969.

Prof. Dr. Necmettin Erbakan founded Milli Selamet Party with the staff of Milli Nizam Party, which was closed on October 11, 1972. His party received 12% of the votes in the elections on October 14, 1973 and entered the parliament with 48 deputies.

With the emergence of the Cyprus problem, he defended the Cyprus Operation and personally did all the work and planning necessary for the operation to take place. The coalition government broke up on September 17, 1974.

Prof. Dr. Necmettin Erbakan who was kept under surveillance in Izmir Uzunada for a while after the September 12, 1980 coup, was arrested on October 15, 1980, along with 21 leaders of Milli Selamet Party, on charges of "turning MSP into an illegal society and acting against secularism" and was released on July 24, 1981.

He was banned from doing politics for 10 years with the decision of the 1982 Constitution. When his sentence was over, he returned to politics with the referendum of 6 September 1987 and was elected as the leader of Refah Party on October 11, 1987.

Prof. Dr. Necmettin Erbakan was sentenced to 2 years and 4 months in prison on March 6, 2002, within the scope of the trial known as the "Lost Trillion Case", which is a purely political case in terms of content.

His five-year political ban ended in February 2003 and he started to work as the leader of Saadet Party on May 11, 2003. His prison sentence was upheld by the Court of Cassation on 3 December 2003, and he resigned from the general presidency duty of Saadet Party and the party membership. 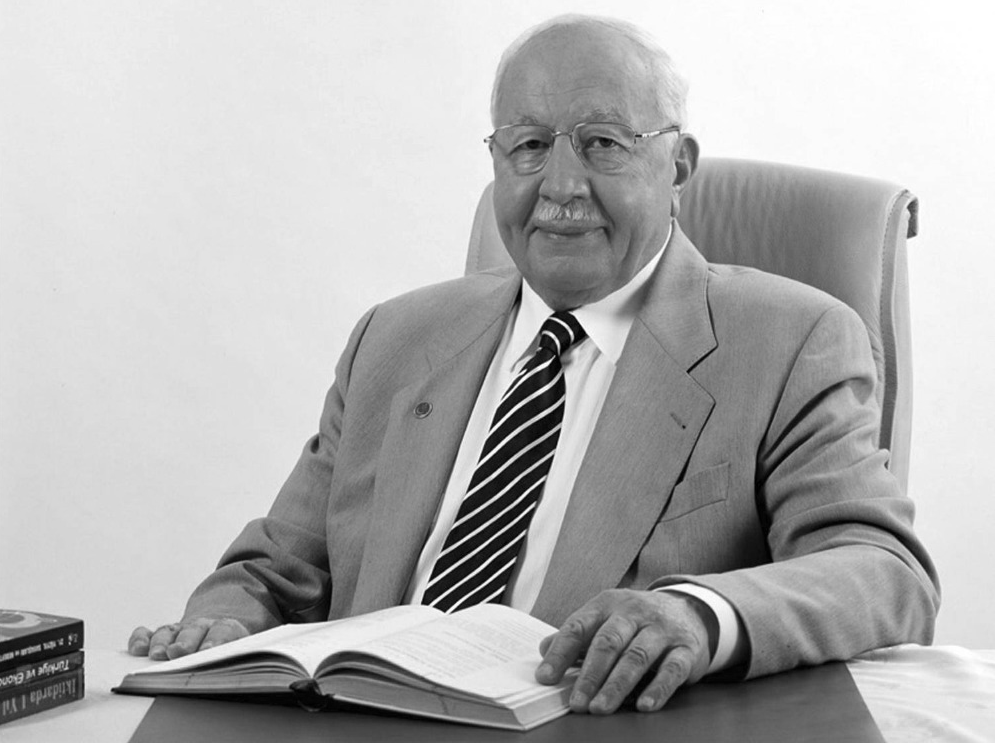